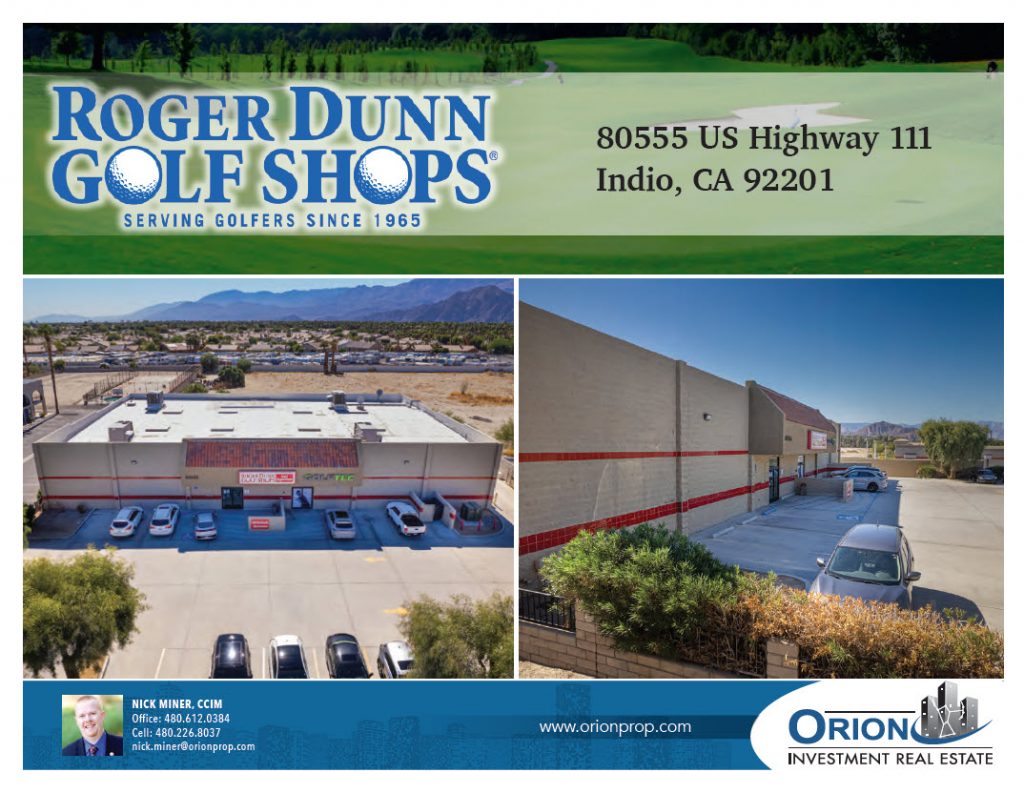 INDIO, CA – Nick Miner, CCIM of ORION Investment Real Estate, reports selling a 13,248 square foot single-tenant, retail building along Highway 111 in Indio, California for $3,300,000 or $249 per square foot.  The property was 100% occupied by Roger Dunn Golf.  Miner represented the Seller in the transaction, Vans Golf Properties, LLC, who Miner has been helping to liquidate other real estate holdings.  Miner continues to market a property in Scottsdale, Arizona for the seller.

Indio (Spanish for “Indian”) is a city in Riverside County, California, United States, in the Coachella Valley of Southern California’s Colorado Desert region. It lies 23 miles (37 km) east of Palm Springs, 75 miles (121 km) east of Riverside, 127 miles (204 km) east of Los Angeles, 148 miles (238 km) northeast of San Diego, and 250 miles (402 km) west of Phoenix.  The population was 89,137 in the 2020 United States Census, up from 76,036 at the 2010 census, an increase of 17%. Indio is the most populous city in the Coachella Valley, and was formerly referred to as the Hub of the Valley after a Chamber of Commerce slogan used in the 1970s. It was later nicknamed the City of Festivals, a reference to the numerous cultural events held in the city, most notably the Coachella Valley Music and Arts Festival.

Nick Miner, CCIM, Senior Vice President at ORION commented, “We had multiple offers within the first week of marketing the property for sale.  The buyer ended up being the new operating company that purchased World Wide Golf.”

Call me for more information.